It’s that time of year when we’re all thinking of chocolate, which is not a bad thing. But, I’d like to introduce you to something a little different – my baklava sundae. Phyllo cups, honey, cinnamon and pecans are all reminiscent of the classic dessert without all the work.

These take well under 20 minutes to make, and any one who eats it will be sufficiently impressed. Make these for your next dinner party or a cozy night in. And if someone in a bear hat shows up to help, watch them closely around the cinnamon sugar….. 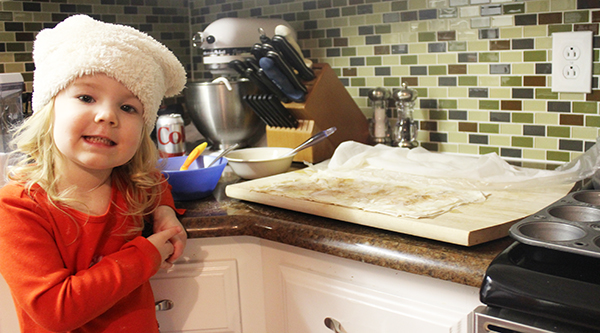 Preheat the oven to 425 F. Grease a muffin tin with cooking spray. Melt butter in the microwave. Whisk together sugar and cinnamon. 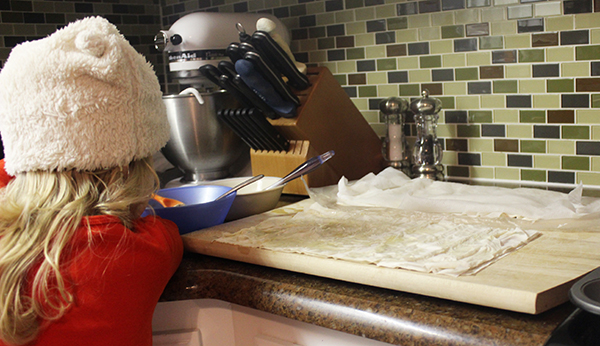 Start with one sheet of phyllo dough. (Please note: this stuff is really fragile. If you rip it or it tears during this process. Do not freak out. No one will care. Just plop another on top. I had a surprise helper while making mine, so there were plenty of little tears. Not to worry – they still looked and tasted great.) Cover the remaining sheets with damp paper towels, while you work. Phyllo dough dries out quickly, so you want to keep it damp. Brush butter over the entire sheet. Sprinkle lightly with the cinnamon sugar. Now, take another sheet and layer it on top of the other one. Repeat with butter and cinnamon sugar. Continue building until you have four or five sheets stacked. Add melted butter and cinnamon sugar to the top layer.

Now, use a sharp knife to cut the dough in half vertically. Then, cut each one in half vertically, so you have four pieces. Then, slice them in half horizontally. Place each one in the muffin tin, making a small cup. You will have more than 6, but this gives you a little margin for error. 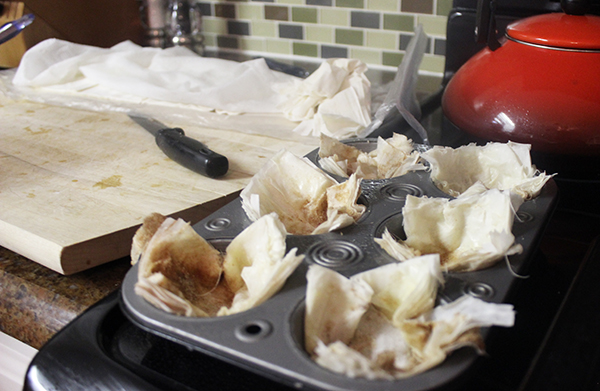 Bake for about 5 minutes or until lightly golden.

Meanwhile, toast pecans over medium heat in small pan. Give them a shake here and there. Remove them from the heat when you can smell a nice nutty flavor.

After the cups have cooled, add in small scoops of vanilla ice cream. Drizzle honey on top. Lastly, sprinkle with pecans. 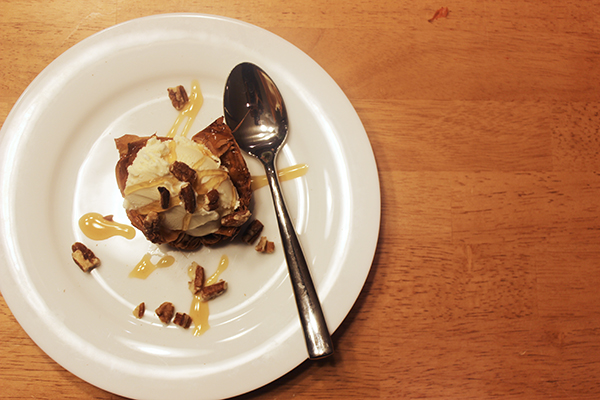