At our house, Sunday dinner is usually something special. If we’ve been in town, I try to spend a little more time in the kitchen and actually set the table. Candles are lit, cloth napkins are added and sometimes, I open a bottle of wine. 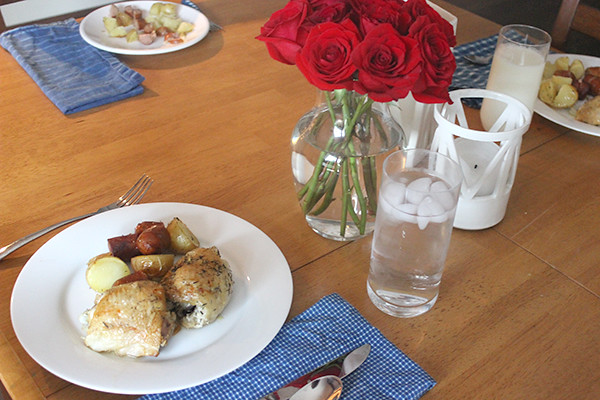 A few Sundays ago, I remade a dish by Nigella Lawson that was a forgotten favorite. Chicken thighs are baked alongside chorizo and potatoes. Spiked with red onion, orange zest and dried oregano, the flavors are really special. But, that particular night, I had to swap out the chorizo. I used smoked sausage instead, and it was still really good. The whole thing had me wondering which other changes I could make.

In my version, I used a very similar cooking method, but traded chicken sausages for chorizo, added lemon zest instead orange and sprinkled thyme and rosemary in the place of oregano. The result was really, really good, and deceptively simple. Comforting, warm and a hit with my family, I have a feeling this may become a new Sunday tradition.

Roast Chicken with Sausage and Potatoes

Serves 2 and a toddler

3/4 lb. chicken sausage (I used one with apple. You could substitute smoked turkey.)

Zest from half a lemon

Preheat the oven 425 F. While the oven is heating, cut the potatoes in half. Roughly chop the onion. Cut the sausage into pieces that are 1 inch long. Now, heat the oil over medium high heat in an ovenproof skillet. Season the chicken with freshly cracked black pepper. Put it in the hot oil, skin side down. Cook for about 6 minutes or until golden brown. Once golden, turn the chicken skin side up. Add the potatoes and chicken sausage to the pan. Scatter the onion around. Sprinkle the herbs on top and add the lemon zest. 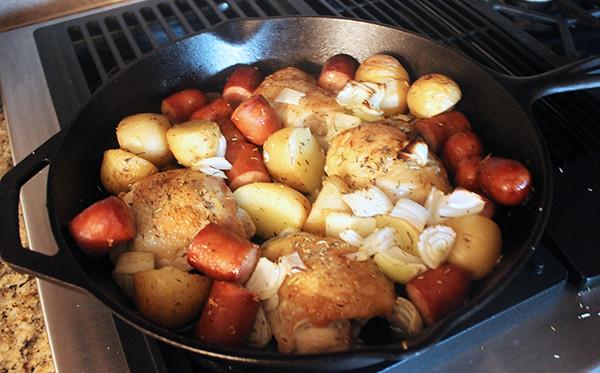 Place in the oven and cook for an hour or until cooked through. Halfway through, remove and toss the potatoes and sausage in the juices before returning the entire pan to the oven.