When the weather gets cooler, I love to roast a whole chicken on the weekends. I know, I’m very wild.

Although it takes awhile to cook, most of that time is inactive, which means I can pop in and out of the kitchen pretty easily. Also, the leftovers are delicious. 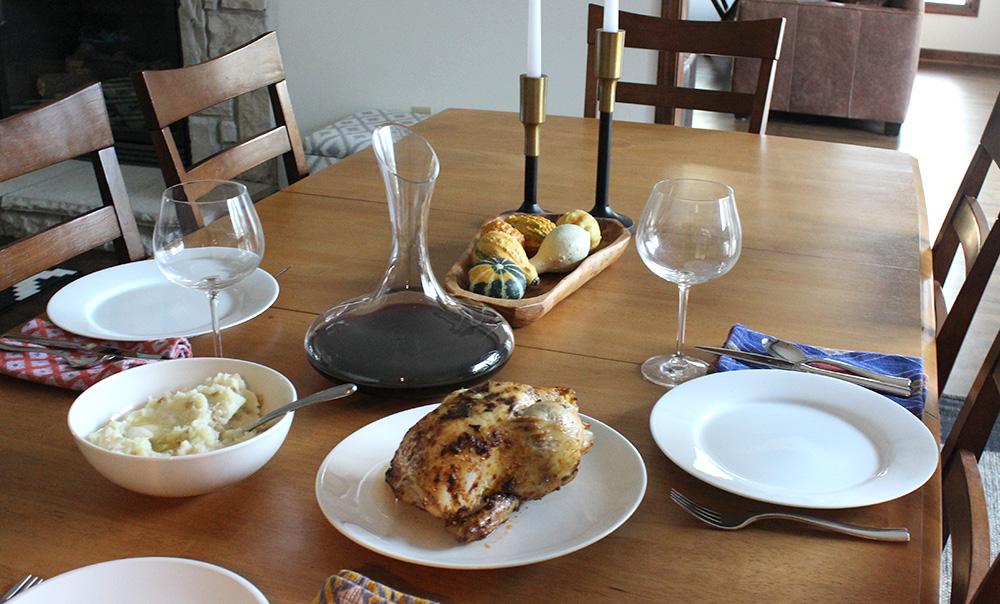 Over the years, I’ve mostly made the same, three versions of roast chicken. All our really good, but not my own recipe (Gwyneth, Ina and this slow-cooker version). So, in making my own, I started with elements of my two favorites and merged them to create something new.

The result was flavorful and lightly smoky. Served with mash potatoes or a big green salad, make this to impress your favorite people without breaking a sweat. Unless, of course, your kitchen gets unnaturally hot like mine, Then, you may sweat a bit.

Directions:
Preheat the oven to 400 F. Pat the chicken dry with a paper towel.

Then, slice the garlic head in half horizontally. Take the orange and cut it in half as well. Cut one orange half into quarters. Stick those four orange pieces and both halves of the garlic inside the cavity of the chicken. Leave the remaining orange half for later.

Now, melt the butter. Stir in the smoked paprika and oregano. Brush all over the chicken, coating it well. Now, season the whole chicken with salt and freshly, cracked black pepper.

Slice the onion into thick pieces and scatter them around the chicken. Now, turn the chicken on one side and put in the oven. Roast for 25 minutes.

Then, remove and turn on its other side. Squeeze a bit of orange juice from the remaining half over the chicken. Return it to the oven and roast for another 25 minutes. Then, turn it on its back, so the breast is facing up. Roast for 10 minutes. Now, turn it onto it’s breast, so its back is up and cook for another 10 minutes. If the juices are running clear, remove from the oven and squeeze a bit more orange on top. Then, let rest 15 minutes before serving.