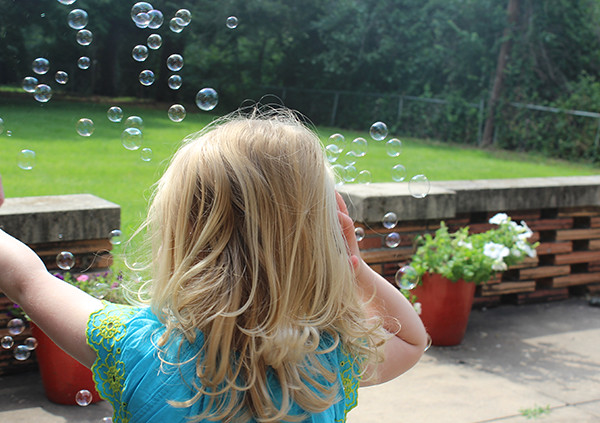 This year, we threw a small party for Ellie with a few friends and family. It was a lot of fun. There were bubbles.

We went for a gardening party theme, since Ellie loves few things more than digging around outside. I used this chevron runner from Paper Source that is a longtime favorite. The color scheme was mostly pink, orange and purple, but some yellow and green snuck in as well. 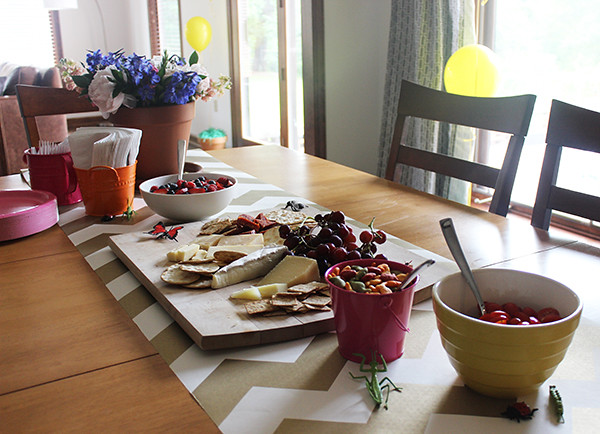 On the table, I used little buckets and watering cans (like this) for silverware and napkins that I found at Michael’s. I also picked up a tube of insects there and scattered those around the food. 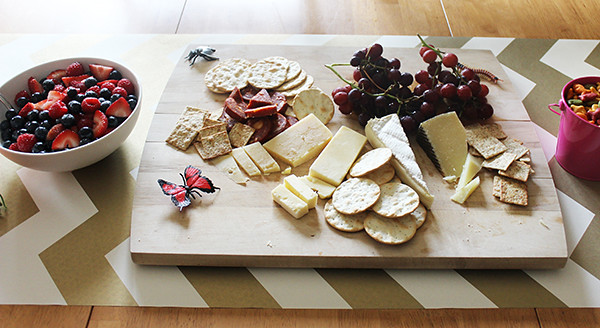 As usual, I did a quick cheese platter and berries for the birthday party menu. The strawberries, blueberries and raspberries were tossed in vanilla sugar. I chose parmigiano, cheddar, manchego and brie for the platter with crackers, sliced chorizo and grapes. 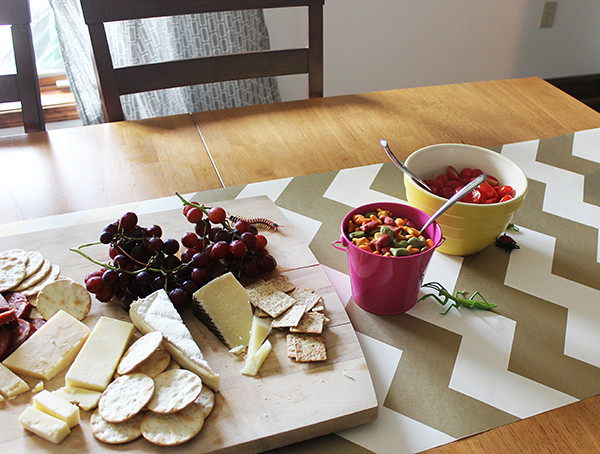 To round out the food, I added a few more of Ellie’s favorites. Grape tomatoes were halved and tossed with black pepper and salt. She also requested Goldfish, so I popped those into a little pink bucket. This was probably the highlight for her. 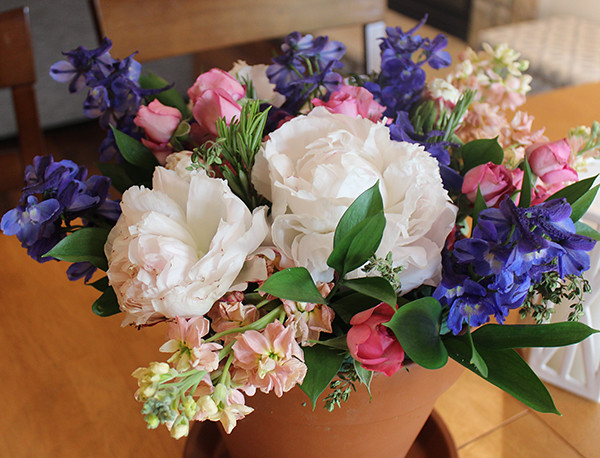 Then, I went a little nuts. I had the idea for a floral arrangement in a flower pot, so this happened. Peonies, larkspur, foliage, spray roses, stock, rosemary and thyme were tucked into wet floral foam. (I’m well aware this is nuts for a three-year-old’s birthday party……) 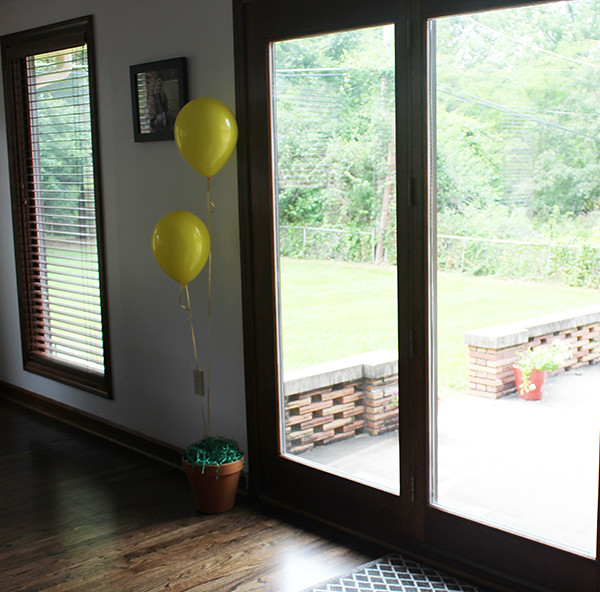 By the doors, I placed two terracotta planters. In them, I put a circle of floral foam inside that floated a few inches below the top. I add two balloons secured with a weight on top. Then, surrounded each one with shredded green paper, so it would look like balloons were blooming. I had planned to add paper flower petals to each, but the paper was too heavy, so I left the whole thing as is, which was still pretty cute. 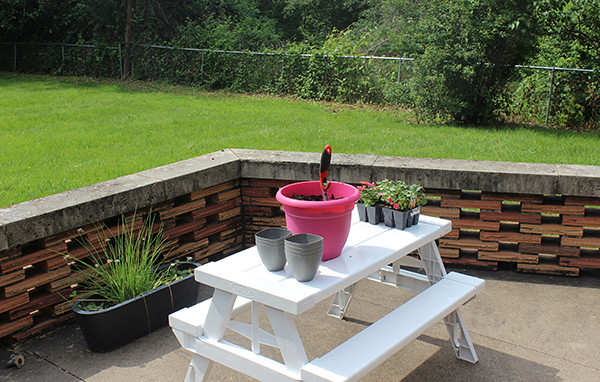 For the activity, I picked up some inexpensive planters (like these) for each of the kids, and Ellie chose petunias to plant. The large pink pot held soil, so each guest could prepare their own plant. Mostly, the kids scooped and dumped the dirt around, which, lets face it, was kind of the point. 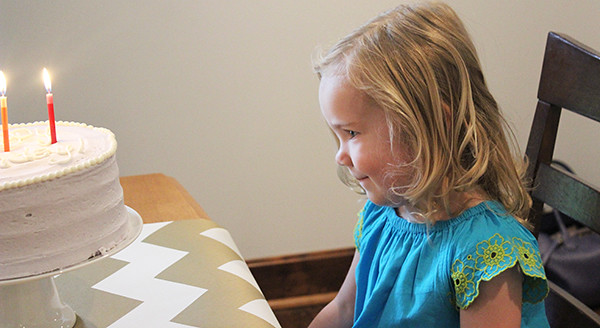 Then, we headed inside for a bit. Ellie requested a chocolate cake with purple icing. Here, we are singing her Happy Birthday. She loved it. 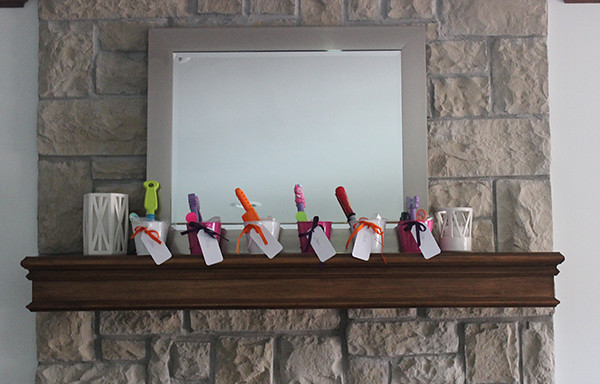 For the favors, I bought pink and white buckets. (You can find similar ones here.) I added a gardening tool to each. Also slipped in were small plastic bags filled with gummi worms and secured with the prettiest flower stickers.

We are living in strange times where “How are you?” can feel like a loaded question. But, I’ll go ahead and ask, “How are you doing?” I hope you’re navigating things with confidence though I am often not. Here, at our house, we feel both fortunate and burned out. I have laughed so hard I…

I actually wrote this past last year. It’s been tucked away in an old notebook with 38 things I learned over the course of my life. Today, on my birthday, I added one more and hit publish on this personal post. Always take the trip. There are few things I regret more than the vacations…

I love having a vegetable garden. But over the years, I’ve had a number of missteps. From them, I’ve learned a lot. In this post, you’ll find five vegetable garden mistakes to avoid, as well as details on what I’m planting this year and why. 5 Vegetable Garden Mistakes to Avoid Make sure your garden…

How are you holding up? Here, in our corner of the quarantine, we have a lot to be thankful for – our health, office spaces at home, a big backyard and an endless supply of art materials for Ellie. And yet, this is hard for all of us, because it is big and scary and…

For years, something has been shifting in middle-class America. Pre-competitive and competitive sports start at age 5. Subtraction happens in kindergarten. Reading chapter books is expected at first grade. Multiplication begins in second. And, these are just the early elementary school years. All of the advancements might sound like a good thing. We’re moving forward,…